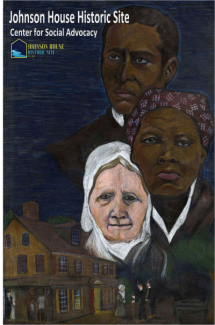 The range of the Johnson Family’s  antislavery involvement is extraordinary. Rowland Johnson’s roles are probably the most prominent.  In addition to serving as an officer of the Junior Anti-Slavery Society, he was a member of the Association of Friends Committee on Requited Labor, secretary of the Upper Delaware Ward Anti-Slavery Society, a member of the Vigilance Committee of Philadelphia (who protected freedmen’s rights and resisted slave-catchers), a founder of the Longwood Yearly Meeting of Progressive Friends (who were militant abolitionists and whose participants included Oliver Johnson, Sojourner Truth, and Bartholomew Fussell among many others), and a Vice-President of the American Anti-Slavery Society (whose other officers included William Lloyd Garrison, Samuel May, Lucretia Mott, Robert Purvis, Thomas Garrett, and Wendell Phillips among other renowned abolitionists).23  Israel H. Johnson was also a founder and officer of the Junior Anti-Slavery Society, a manager of Philadelphia Free Produce Association (which boycotted the products of slave labor), a supporter of the Association of Friends for the Free Instruction of Adult Colored Persons, a manager of the Institute for Colored Young Men,*** an officer of the Friends Association of Philadelphia and Its Vicinity for the Relief of Colored Freedmen, and a manager of the Home for Aged and Infirm Colored Persons. 24 Elizabeth R. Johnson, sister of Rowland and Israel, was a member of the Germantown Freedman’s Aid Association and a contributor to the Ladies Union Bazaar Association Fair For the Benefit of the Colored Orphans Asylum25; Henrietta (Wolcott) Johnson, M.D., Rowland’s wife, was a founder of the Longwood Yearly Meeting of Progressive Friends26; and Mary (Marshall) Johnson, Israel’s spouse (whom he married in 1872), was a supporter of the Colored Orphans Asylum and a “liberal contributor” to the Home for the Aged and Infirm Colored Persons.

23  Junior Anti-Slavery Society of Philadelphia, “Preamble and Constitution of the Society,” undated bound volume (ms.), Historical Society of Pennsylvania; American Anti-Slavery Society, Third Annual Report, May 10, 1836; Vigilance Committee of Philadelphia, Minute Book, 1839-44, July 17, 1839, Historical Society of Pennsylvania; Pennsylvania Yearly Meeting of Progressive Friends, Proceedings, 1853, p. 6; 1854, pp. 3,4,6; 1855, p. 3; 1856, pp. 43f; American Anti-Slavery Society, Annual Report, 1859.   24 Philadelphia Free Produce Association, Minutes of the Board of Managers, 9/20/1845, cited in R.K. Nuermberger, “The Free Produce Movement,” p. 36; Home for Destitute and Colored Children, Minutes of the Board of Trustees, No. 1, 1856-1932, 6/23/1858 and 2/18/1870, Friends Historical Library, Swarthmore College; Friends Association of Philadelphia and Its Vicinity for the Relief of Colored Freedmen, Circular, November 18, 1865, HSP and Statistics of the Operations of the Executive Board of the Friends Association, etc. Philadelphia, 1864/65; Association of Friends for the Free Instruction of Adult Colored Persons, Annual Reports of the Board of Managers of the Association, 1864-67; Emlen Institute for the Benefit of Children of African and Indian Descent, First Report of the Trustees of the Emlen Institute, Philadelphia, 1873, pp. 1, 14; Home for Aged and Infirm Colored Persons, Broadside 12/30/1876, HSP.   25 Germantown Freedman’s Aid Association, Minutes of the Meetings, Vol. 2, p. 18, Germantown Historical Society. 26 Pennsylvania Yearly Meeting of Progressive Friends, Proceedings, Philadelphia, 1853, p. 4; see also Albert John Wahl, “The Congregational or Progressive Friends in the Pre-Civil War Reform Movement,” unpublished Ed. D. dissertation, Temple University, 1951. Henrietta (Wolcott) Johnson was an activist in a range of causes: see, for example, her membership in the American Female Medical Education Society, The First Annual Report of the American Female Education Society. Philadelphia: James A. Bryson, 1854, p. 2; other members included Lucretia Mott and Joseph Dugdale.

*** Association of Friends for the Free Instruction of Adult Colored Persons was a Quaker organization organized in 1789 in Philadelphia to operate a charity school for black adults.  The Association provided free adult education to blacks until 1904 when it was dissolved and its assets were transferred to the Institute for Colored Youth, later renamed Cheyney University.

In 2015 Johnson House voted to become an empathetic representative in the community – championing challenges directly, or, through other established entities — and formally
launched the CSA. CSA expands our programs by serving as “a place to engage the community, facilitate shared conversation, build advocacy, and act to address
contemporary issues that negatively impact communities.

Mission:     Educate, train and empower everyday citizens in the Germantown area and beyond to address racial, economic, and social issues

Strategy:   Build on the knowledge, history, and present day experiences of Johnson House and community partners to increase the number and capacity of leaders who are or want to
work on racial, economic, and social injustice issues